Whenever my parents come to visit, I know for certain that my fridge will fill to the brim with nostalgic foods and flavours I remember from home. “Stay healthy, and eat well,” my parents tell me, simultaneously with their words and the many bags of dumplings, steamed buns, and soup broths they carefully wrap and tuck into my freezer before leaving.

For me, food has always been an expression of love and care. For all that can go unspoken between people, food holds within it the powerful ability to connect and share stories. When I learned I had the chance to attend Sustenance Festival’s Storytelling Feast and Exhibit, a free multi-course dinner event sharing diverse foods and stories from across Vancouver, I excitedly picked up tickets.

Bundled up against the Vancouver’s November cold, my friend Jane and I arrived at Roundhouse Community Centre, where we were greeted by the hot steam of a delicious stinging nettle tea from Raven and Hummingbird Tea Co. As we settled into our seats, we were welcomed with a song from Senaqwila Wyss and her child.

Wyss’ resonate voice filled the space, wrapping us in its warmth and strength. Her child ambled playfully across the stage and into the audience, turning back every so often to look at her mother, the two catching each others’ eyes, before the child ran off again to chase other adventures. We would later also hear from Wyss’ mother, Cease Wyss, who would explain how the two of them established Raven and Hummingbird Tea Company with foraged teas from the land – their Squamish homelands and the territories we gathered upon.

Wyss’ song and the tea we drank reminded me of what a gift food and drink is; of the importance of remembering the origins of each ingredient, of the mindfulness with which we must have when borrowing from the earth, and to always remain grateful and to give back to the land for allowing us to live, eat, and play on it.

As the final notes of the song quietly dissipated into the air, Nihal Elwan came to the stage to share with us the story of Tayybeh, a local Syrian women’s catering company which runs as a social enterprise. What began in 2016 as a small, neighbourhood pop-up dinner to support Syrian refugees has since grown into a successful catering company that remains true to its mission to support and celebrate Syrian women chefs and their families.

The story of their resilience was intimately captured by Elwan, who recounted the many times the women had expressed to her that, despite not being comfortable with the English language, they always felt immense pride in being able to contribute back to the community by sharing their food.

As our first dish of the evening’s multi-course meal, we were served a delicious appetizer of yalanji, grape leaves stuffed with rice, vegetables, and herbs, and samboosak, fried triangle pastries, filled with cheese.

Next on the menu was a steaming bowl of matzah ball soup, an Ashkenazi Jewish dumpling soup in chicken broth with sliced carrots. The familiar warmth of chicken broth, a shared comfort food for many, complemented Mara Shnay’s equally heartwarming stories of how spontaneous shared meals with her son’s friends had been opportunities to share traditional foods with others. Shnay’s fond memories of her time spent in Jewish synagogues, and of their warmth and welcoming, infused the soup she shared with us.

In light of the recent tragedies in the Jewish community, Shnay spoke of a hope for food to continue connecting people, rather than dividing us.

This was followed by a Ugandan dish of muhogo, sukuma wiki and kachumbari, which contained fried cassava, braised kale, and a tangy tomato relish. Margaret Mubanda described to us the importance of cassava in Uganda. A staple crop, its resilience in sun, rain, and drought made it a reliable food source that is used and consumed in a variety of different ways. Yet despite its abundance in Uganda, Mubanda expressed how difficult it was to find foods she remembers from Uganda in Canada, and that when they were available, would be at prices inaccessible to many. 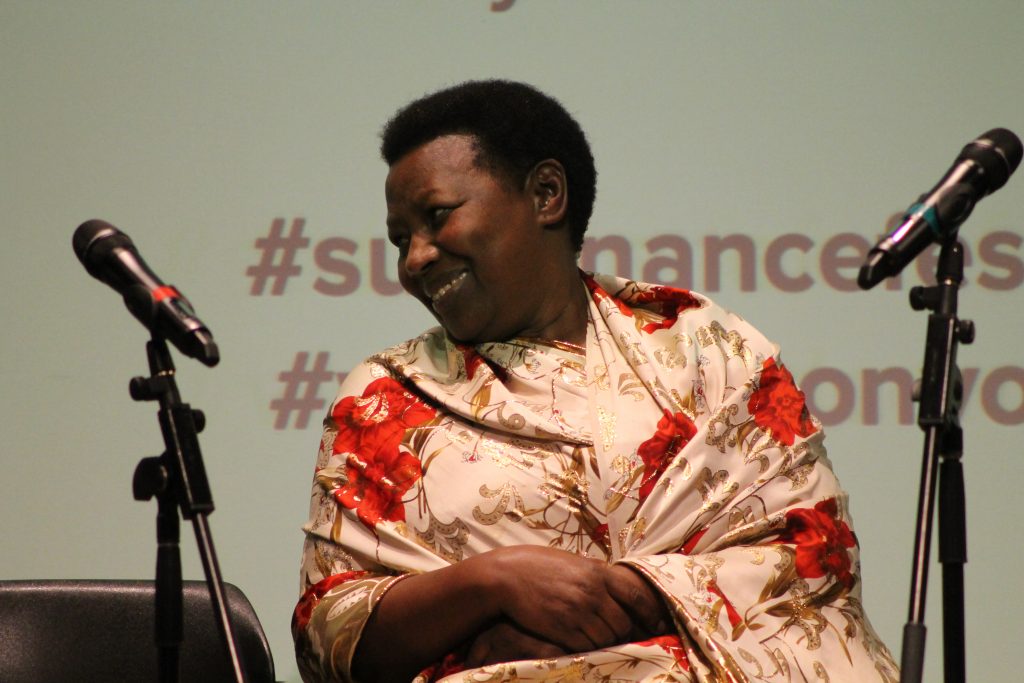 Mubanda emphasized the issue of food security as not simply being about reaching caloric goals, but of changing the system to encourage more cultural food access, so that newcomers can more easily re-create the dishes that nourished them from home into their new kitchens.

Tivi Lopez introduced us to a wonderful dish inspired by the cuisine of the Wayuu people in La Guajira of fritura de cordero con arepa, a dish of pan-roasted lamb and corn patties. Her stories brought to the fore the importance of remembering the role of Indigenous peoples in cultivating the foods of a country, and that the idea of “authentic” cuisine extends far beyond simply that which is most popularly served in restaurants. Food plays a role in not only telling new stories, but of also remembering histories that celebrate those who have made food on the land long before us.

Amharic language and cultural educator Mekdes Gate offered a dish of ayib de gomen, which was a platter of injera, an Ethiopian sourdough flatbread, eaten with a dish of braised kale and homemade Ethiopian cheese. Gate’s story of her initiative to help send school supplies and tables to schools in Ethiopia reminded us that food can go beyond helping people through simply feed them, but that it can also be used to bring people together in supporting social causes.

Next, was a nourishing bowl of oden, a Japanese Kanto-style hot pot dish with stewed daikon, gobo, fish cake, and tofu in a bonito kelp broth. Atsumi Hashimoto beamed with pride as she told us stories of Tonari Gumi 隣組’s gardening club, of which she is a member, and the care the community took in growing healthy, sustainable vegetables in their own gardens, particularly of the beautiful daikon, a challenging vegetable to grow, but when successful, is well worth the reward.

The rich flavours of each ingredient in the dish spoke not only to the deep roots from which these vegetables grew, but also to the rich traditions and contemporary innovations that these recipes emerged from. In Our Edible Roots, a book recently published by Hashimoto and Tonari Gumi gardeners, the story of each vegetable, from seed and soil to the final plating of a dish, are lovingly told. The book’s subtitle, The Japanese Canadian Kitchen Garden acknowledges the intricate connection and interplay that the food we prepare in the kitchen has with the earth from which it came from. Community farmers, gardeners, harvesters, recipe writers, and cooks are all celebrated in their importance to bringing together people for a shared meal.

Hashimoto expressed that by knowing the roots of your cultural food ingredients, and by growing one’s own vegetables, one can experience and learn about food traditions that are so much more expansive and rewarding than if one were only to experience dishes through restaurants.

Lastly, for dessert, Kevin Huang presented us with Chinatown’s New Town Bakery and Restaurant iconic apple tarts. Since 1980, New Town has been an iconic fixture to Vancouver’s Chinatown, reliably serving people with its freshly made pastries and other restaurant dishes. Huang spoke about places like New Town not simply as businesses, but as cultural and sustenance spaces, as places that nourish not only the people who visit for food, but also the city as a whole.

With its rich history and stories of those who remain, Chinatown leads the way in providing places where fresh, affordable produce feed many who still live and thrive in the area, and where intergenerational connections are being made through community-based arts and culture initiatives. With the ever-present eyes of new developments on Chinatown, Huang encouraged us to see that growth in Chinatown does not necessarily mean a revitalization, but that it could be a vitalization of what is already there.

As the night drew to a close, I left the event filled to the brim with both food and hope. I felt very grateful to be able to attend such a special event, and to participate in celebrating all those who had worked hard throughout the festival to make it a success. The shared experience of eating together and hearing stories reinforced my belief that food is so much more than something to eat, but that it is something that has within it the ability to bring joy, community, and justice to people.

The Storytelling Feast & Exhibit was a feature event of the 2018 Sustenance Festival, a community food, art, and culture festival offering free and accessible events in partnership with more than 20 community organizations, the City of Vancouver, and the Vancouver Parks Board. In 2018, Sustenance Festival supported over 50 events between September 22-November 22.

Learn more about Arts, Culture, and Engagement at the Vancouver Park Board: